I had purchased Cindi Edgerton's Trim the Tree paper pieced Christmas Tree Skirt pattern almost three years ago after having seen a skirt at a local guild quilt show. I began collecting greens, greens with a touch of gold, reds and reds with a touch of gold. For the background I purchased an entire bolt of cream with tiny cream stars. Once I began, it took me over two years to finish this Christmas Tree Skirt. Once it was pieced, it sat for almost six months while I debated how I would quilt it. 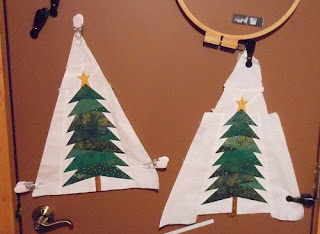 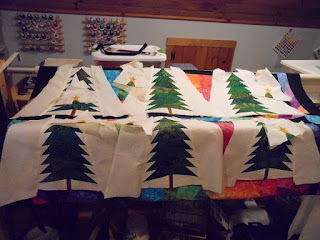 It was paper pieced which I generally love to do. The actual pieces while time consuming worked up nicely. Once I got two done, I was inspired to finish the other six.

And, once the eight were complete I was very excited!! It was shaping up nicely but the big question was when it was sewn together would it be flat?? 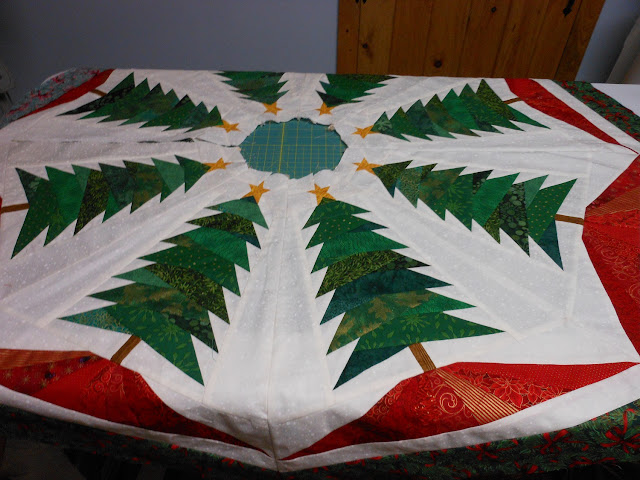 So as you can see - I thought that I was being smart. This project could have been either a table topper or a tree skirt. I followed the directions for a tree skirt - where you did not add the  small triangle that would have filled in the hole  I also did not sew the skirt into a complete circle ... thinking that it would eliminate cutting the skirt through a seam for the opening, Both of these choices I regret - lol -  as it created another set of problems when I went to quilt it on the longarm. If I were to make any tree skirt again, I would sew it as if it were a topper and then cut out the center and slice up the side! 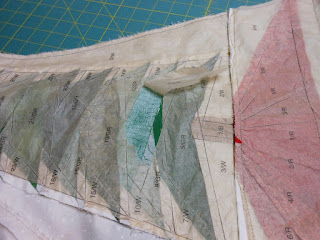 So now that it was all together my most un-favorite part of paper piecing began. As you can see, the foundation was thin tissue paper. Usually when I paper piece, I use inexpensive copy paper and run either a qtip dipped in water or a Clover Fabric Folding pen filled with warm water down the stitches of the seam. That moisture softens the paper under the stitches and the entire piece easily lifts off. That was not the case with this tissue paper- it just made a mess if the paper. I had to resort to ripping one segment off at a time. 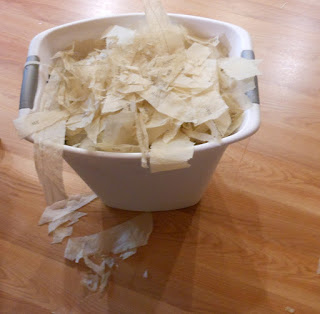 And trust me - I made quite a mess in my sewing room!!


So, in preparation for putting it on the longarm, I did something that I never have done ... I bought some spray baste and spray basted it to the batting.  I usually "float" my top on the batting when I quilt it but if I did that, then the skirt opening would flap open (yup ... bad choice there). This seemed to actually work well and the skirt stayed flat. 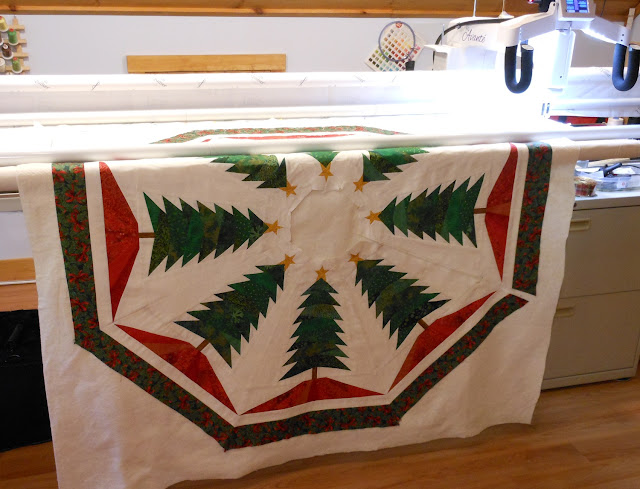 I used an Anne Bright design (Snow Crystals) suggested to me by a friend and it was a perfect pick! 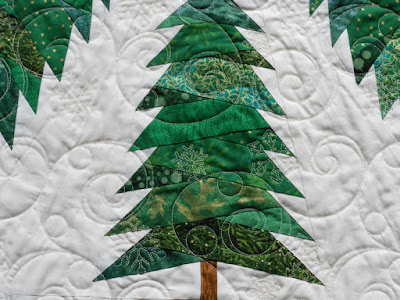 And after a day of hand stitching ..... It is finished. 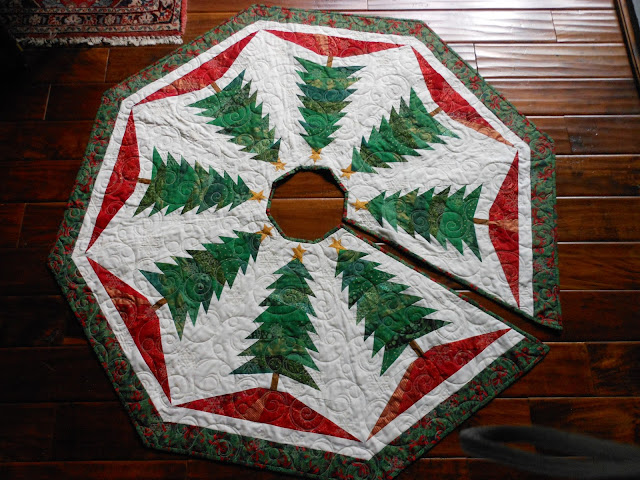 I, like most of you, have so many things I have started only to have life get in the way. My last two years were consumed with health issues and some personal stuff. I never did seem to get out of my own way!! BUT in the last few months I have been busy.

My quilt for today's show and tell is a panel I picked up a few years ago to make a quick Christmas quilt for a dear friend. It was started and then put aside like many of the other UFOs for another day. I am usually careful when I do this -  stacking all the fabric and either the actual pattern or the EQ layout sheet (including the name so I can re-find the file) together and placing them is a clear tub for later completion. However that did not happen this time, the panel and partially completed pinwheels (about 75% of the pinwheels were complete and trimmed to size) were left in a large 2 gallon ziplock,  haphazardly stacked with the loose fabric. Well ... 18 months later I could only find the blue fabric, the pinwheels and the panel. The white on white was missing. Sadly I could not remember where I got the white on white or who the manufacturer was. If any of you have ever searched the internet for white on white, you know the daunting task it is to find the exact fabric that you are looking for. I took me several weeks but I was successful and ordered 3 yards more ... and yes a week after I received the new yardage I did find the other piece - lol!!

I did finally finish it and I was very pleased with the outcome. It is for my dear friend whose two grandchildren stay with her several nights a week. They are two of the most beautiful little girls who love to cuddle. So what better Christmas gift for my friend than a fun winter quilt with a soft cuddly flannel back for the girls. I chose a Anne Bright design of snowflakes and swirls. I am new at this computerized quilting and while the design was perfect, I wish i had chosen to make the design just a bit smaller than I did, but it is done and ready to go. 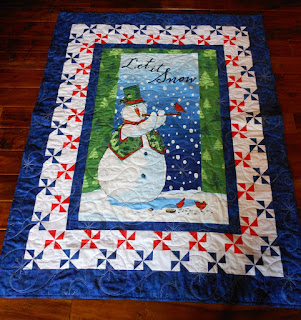 I struggled with the label this time. In most of my other quilts I used either stark white or cream for the label background which for this quilt seemed out of place on the dark navy flannel. Again my scrap pile spoke to me. There on top of the cutting table were the navy flannel trimmings from squaring up the quilt after I removed it from the Avante. I threw a large piece into an embroidery hoop, pulled up my 4D Embroidery software and chose a simple script. I embroidered it with White Rayon and was extremely pleased with the results 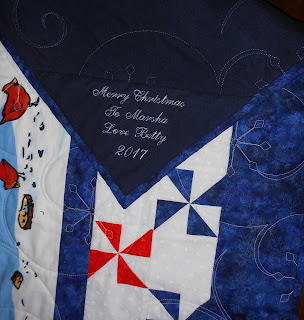 Two more UFOs are in the works - a cute 18" table topper with snowman buttons from the Red Button Quilt Company and a gorgeous paper pieced Christmas Tree skirt. Those will be my next post.

Till next time .... Happy Quilting.

Posted by Elizabeth at 10:39 AM No comments:

Something Fun for Fall

I have had a pattern for  Log Cabin Pumpkins from Suzanne's Art House for quite a while - maybe three or four years. After I bought it, I began picking up 1/4 yard and 1/2 yard pieces of orange and yellow/orange fabric. I kept adding to the stash until I finally decided to make this.


I decided to paper piecing these leaves and pumpkins as I tend to like the preciseness of paper piecing. So, I drew the pumpkins and leaves out in EQ7 and printed out the paper foundations.


What is really nice about using EQ7 is that once you have designed the block you can drop that block into any size block and it will recalculate the rotary cutting directions or print the foundation for paper piecing any size!! Here is the original size and layout - the blocks finished at 9".


However I am contemplating making another using 6" finished blocks either smaller or longer. The options are endless!


The directions were straight forward and the runner was done quickly. I chose a simple edge to edge pumpkin design and quilted this design with orange thread. 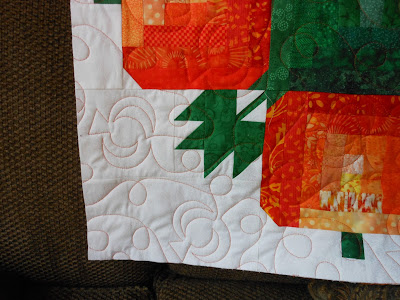 I could not decide which fabric to bind this runner with. Meanwhile sitting on my cutting table was a stack of leftover 1 1/2 inch stripes of all the various oranges, so I sewed them all together and made a scrappy binding!

Back to the grindstone ...

Oh MY!! I can not believe that it has been so long since I posted! While I have not been idle, I have not done a lot. A new machine has joined the sewing room however - A new Avante with ProStitcher!! 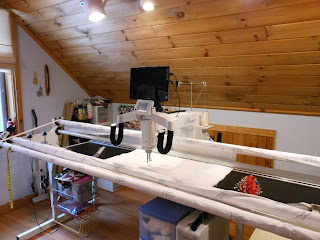 I have enjoyed playing with the new machine and someday I will write that I am proficient on the computer that came with it. While it has not been difficult, there is a learning curve there and there are times that I think I know what I am doing ... only to find out that I was SO very wrong (lol).

My first quilt done on the new machine was a BOM from 2011. I did it free hand and was pleased how it came out. Nice stitches, even tension - what more can a gal ask for? I was never sure that I cared for the border but once on the guest bed I have decided that I really like it. 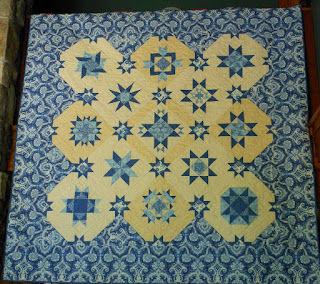 The next one was a Birthday Present for a dear friend. These started as trial blocks and when my friend saw them - she fell in love with them. So a few trial block became a new project. This one was stitched using the computer. I was very pleased with the overall pattern. 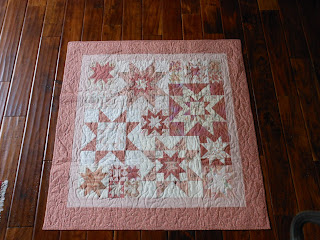 Have you ever done a 1600 Quilt and not liked it? Me too! This QoV sat for three years because I disliked it so much. One day I got the brilliant idea to cut into it. I took my 8 x 24 inch ruler and lined the 30 degree line on one of the seams and started to slice. Then I added navy blue sashing. The hardest thing doing the sashing was trying to make sure that the stripes in the 1600 would look straight.  I was very pleased with the result and it has already been sent off. 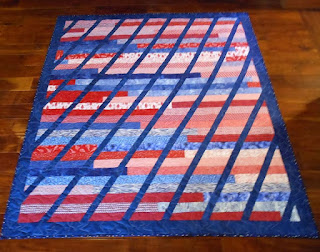 Till next month - Quilt on!

Posted by Elizabeth at 9:55 AM No comments:

Well it is, as I have always referred to it, leaf peeping season here in New England. The colors have been very pretty but we did not have a quick cold snap to force the colors into the trees all at once. It has been a slow smattering of colors but very enjoyable. We have had a steady stream of visitors wanting to admire the colors.

I have been quilting, however, between company. Some for me and some for my friends. A friend from RI came up to visit and brought a quilt that she had started earlier this month. We decided to add a splash of texture and color to it, picked up some wonderful soft flannel for the back and a wonderful teal blender for the borders. A few weeks later, she came up and we quilted it. This was the results!! She was very happy with it. 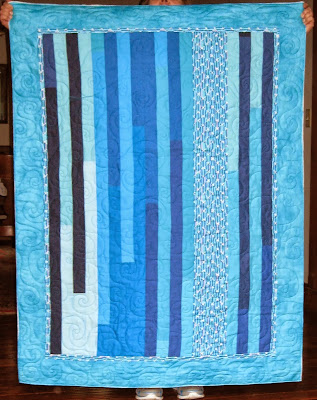 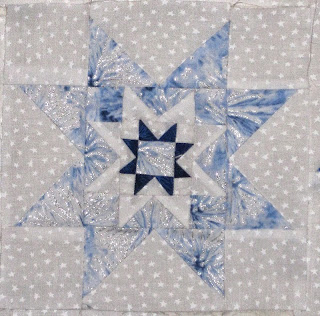 I also have been furiously working on a Christmas present for a friend. When I was visiting her last spring, she picked out some great blue and silver metallic fabric at a local quilt store. At the time, there was a guild challenge going on which challenged the members to make a wall hanging using multiple stars. Here were my first stars. The one on the right is a 6" star with a      1 1/2 " paper pieced star in the center. 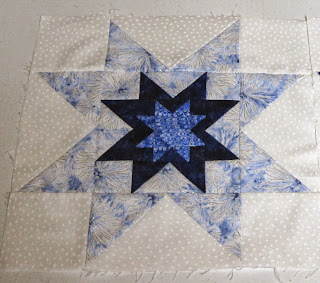 This star was the first of four 12" stars

So off to the races - I needed to finish more to finish the wall hanging. Stars were made, moved around, more stars made and then moved around again. This is what the final results were 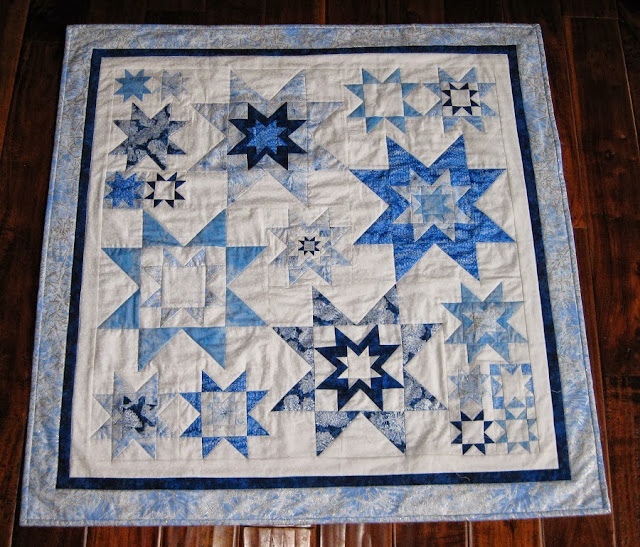 I decided to Stitch in the ditch - which now I wished I had not. The intention was to make to stars POP - and they did - lol - just a bit too much. If I were to do another one, I would quilt it on the long arm.

Posted by Elizabeth at 4:18 PM